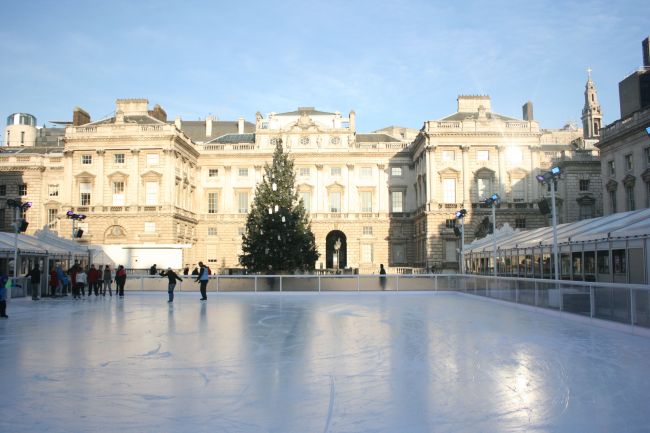 My daughter turned four last weekend.  She’s my eldest, and four seems much older than three.  Three-year-olds can be classed as toddlers; four-year-olds go to primary school.  Yikes.

Miriam has been asking me for months if she can go ice-skating.  Living in central London without a car and with two younger children, this is not an easy request to grant, so I told her that when the winter outdoor rinks sprang up we would go.  This coincided nicely with her birthday, so I booked us a lesson on her birthday – at the crack of dawn, incidentally!

On the way there, I was thinking about how relieved I feel when I look back over the years since her birth.  I’m relieved because I found things so much harder when she was first born than I do now.  I expect most people feel like that, although I know some mums love the baby phase and find the pre-school phase harder.  I don’t want this to sound ungrateful, because children are such a precious gift, but I found the first three months in particular extremely difficult.  I feel so relieved to have gotten this far!  Many thanks to God for his grace!

When we arrived at the ice rink, Miriam was given a stabiliser to hold – they give out heavy, plastic penguins with handles so children can push them along and spend less of their time prostrate on the ice.  But from the moment she stepped onto the ice, Miriam hated it.  Several teachers tried to help her – ‘Come on, take baby steps, I’ve got you, yep small steps, you won’t fall, you’re safe’ etc., but to no avail.  She was miserable.

One of the teachers told me to try waiting inside to see if that helped Miriam to get engrossed and start to enjoy it, but as I watched her through the window she just stood there, morosely gripping her penguin, watching the other children slide and shuffle about.  It was, for both of us, excruciating.

It did strike me that her experience on the ice was a tiny bit like my experience when Miriam was first born.  She had wanted to ice skate because she’d seen it on the TV and it looked fun.  It looked elegant and graceful.  It looked rewarding.  I think she probably assumed it would come naturally – that she’d get it right first time.

My ideas about motherhood were about as naïve as Miriam’s were about skating.  Even when people told me ‘it will be hard at first’, I still didn’t really know.  You can’t know, can you? Not until you get out there on the ice.  Until day three of breastfeeding.  Until no amount of pacing will stop the crying.  Until you realise that between you and your husband, despite your combined intelligence and the books you’ve read, you have no idea what you’re doing.  (I have friends who between them are Doctors three times over, who have at least once managed to put their baby’s disposable nappy on back to front AND inside out!)

One thing that it hurts to admit is that it’s actually a good thing that I didn’t and don’t find motherhood easy.  True, this is a result of the Fall – frustrations and disappointments and poo down the wall won’t happen in heaven – but God is also using this season to make me more like Christ.  It’s hard to be proud when you’re crying because baby won’t get his wind up, or crying with the pain of breastfeeding or just crying because you haven’t had any sleep, or crying just because.  This is when we learn to depend on God more.  If I’d found motherhood easy, then I’d have been even more proud and self-sufficient.  Instead, God chose in his kindness to refine me: to make me more pure.

It’s amazing how a change in perspective can affect you.  Since I’m older than Miriam, I know that ice skating is hard and you have to practise, fall on your bum fifty times, get back up and practise some more before it gets remotely fun.  And yet, when I became a mum for the first time I was so shocked at how hard it was!  (I don’t know why I’m using the past tense – I still regularly get surprised by how hard it is.)  But as we struggle and learn, we’re growing.  God is giving us character – which we wouldn’t get if the lesson were easy.

“Not only so, but we also glory in our sufferings, because we know that suffering produces perseverance; perseverance, character; and character, hope.”  Romans 5:3-4.

I have to admit that, compared to God, I am about as wise and patient through difficulty as my four-year-old daughter.  Thanks be to God that he has the right perspective, and he’s there with me on the ice, holding my hand and cheering me on.

And do you know, it’s not all bad!  Even though Miriam was stubborn, reluctant, sullen and uncooperative, I could see glimpses of a talent for skating.   I know that she didn’t believe me when I said from the sidelines, ‘You’re doing it!  That’s it!’  And when your mum or your friends or your husband say to you, ‘You’re doing a great job’ and it’s week three and you’re just trying to keep your head above water, you might think, ‘as if!’ but they do mean it.  They’re seeing glimpses of the ability God has given you to excel at this particular line of work.

So I’d like to encourage you (no matter how old our child is, by the way!) – if you feel today like you’re slipping around and just getting cold and wet, please remember that God is growing your faith and your character, which is priceless – ‘of greater worth than gold.’ (1 Peter 6:7)  And the people you see gliding around have all been in similar positions to you, they’re just further along the journey. And slowly but surely you are making your way across the ice.  Small steps!

On an even more personal note, I would just like thank God for giving my daughter breath in her lungs for four whole years.  “[Jesus] is before all things, and in him all things hold together.”  Colossians 1:17.  From emergency C-section until now, may I never forget that it’s the Lord Jesus who is holding us together every. single. day.