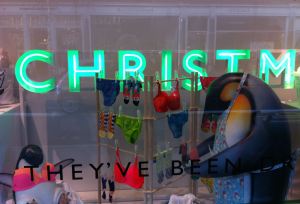 A lovely Kurdish friend of mine asked me a question today about our children’s Christmas performance, ‘Is it about Christmas, or is it religious?’

I think she put her finger on something, don’t you? Christmas has become (posh word alert) dichotomised: there’s the secular wintertide festival, and the ‘religious’ Christian celebration of Jesus’ birth. Sometimes there’s some overlap, although to be honest sometimes I’d rather keep them separate. Do we want reindeer in the stable, or shepherds in Santa’s grotto? Doesn’t that just confuse everyone?

Lots of Christians get upset about this. And actually, a lot of ‘church-goers’ or morally upstanding citizens (and apparently The Daily Mail) get upset about it too. And I agree with some of what they say. Santa does rob Jesus of his glory at Christmas, and that is bad. But when my friends who aren’t Christians don’t celebrate Jesus at Christmas, that doesn’t actually surprise me.

They’re not Christians, so why would they?

Would it be better if they pretended to celebrate Christ? No I think that’s called hypocrisy. And the last thing I want is for them to think that by going to a Nativity play once a year, they’re somehow ‘in the club.’

Being a Christian means a lot more than knowing the words to ‘Hark the Herald’ (my personal fave). And we all know that the rest of the year, don’t we? So why at Christmas to people get so upset that the crowds are queuing in Toys R Us instead of All Souls Langham Place (that’s a church, by the way)? It’s sad, absolutely, but only because I know that Jesus is better than a toy penguin (please see last week’s musings).

On 1st December, the picture in my 3-year-old son’s advent calendar was an angel.
Mummy: ‘Yes because angels visited the shepherds, and they said… (trying to remember)’
Ezra: ‘Glory to God in the highest.’

I’m not telling you that so that you think I’m marvellous, but rather to point you in the directon of Seeds Family Worship, who I have to thank for Ezra’s knowledge of Luke Chapter 2. Seeds Family Worship are the bee’s knees – they make memory verse songs that grown-ups (yes!) and children enjoy. After you’ve read this, go to this page and listen to ‘Joy’, a beautiful Christmas song. Here are the words:

And there were shepherds living out in the fields near by, keeping watch over their flocks at night. An angel of the Lord appeared to them, and the glory of the Lord shone around them, and they were terrified. But the angel said to them, ‘Do not be afraid. I bring you good news that will cause great joy for all the people.  Today in the town of David a Saviour has been born to you; he is the Messiah, the Lord. This will be a sign to you: you will find a baby wrapped in cloths and lying in a manger.’
Suddenly a great company of the heavenly host appeared with the angel, praising God and saying,
‘Glory to God in the highest heaven,
and on earth peace to those on whom his favour rests.’  (Luke 2, 8-14 – underlining mine)

And that’s the truly wonderful thing about the birth of Jesus – it’s good news of great joy.

I’ve got another Tim Keller quote for you. Reflecting on Jesus’ words in Mark 1, ‘Repent and believe the good news!’ he writes:

‘Right there you can see the difference between Christianity and all other religions, including no religion. The essence of other religions is advice; Christianity is essentially news… the gospel says, “This is what has been done in history. This is how Jesus lived and died to earn the way to God for you.” Christianity is completely different. It’s joyful news.’ (King’s Cross, p. 15.)

So at Christmas, are we good news in our communities? Do people see us rejoicing, and trying to tell them the good news of great joy that is for all people: rich clever people, poor smelly people (no offence, I was thinking of the shepherds), inn keepers and single mums and drunkards? Or do they just hear us complaining that the shops shouldn’t be open on Boxing Day?

Let’s show them that Christianity is different. It’s not advice; it’s good news for all people. Let’s stop judging and ranting and instead celebrate, and generously share this fantastic news with our friends and family.