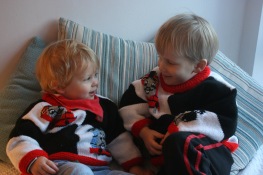 Do you know there’s a Samson in Thomas and Friends? He’s very strong. I was explaining to my daughter that he’s named after the strong man, Samson, in the Bible. She asked me if the Thomas people love Jesus. I said I don’t know but lots of people have heard of Samson.

Biblical names are really in now, aren’t they? I enjoy telling people who my children are named after in the Bible, because so many of the Biblical characters are fascinating. I mean, Zacchaeus – he climbed a sycamore tree, for crying out loud!

I’ve just started reading through a couple of chapters of Luke’s gospel each day. It’s just mind-blowing. And the characters (when I say characters I don’t mean they’re fictional, of course) are so diverse and intriguing. It’s easy to get a bit distracted by them, really. For example, Anna:

There was also a prophet, Anna, the daughter of Penuel, of the tribe of Asher. She was very old; she had lived with her husband seven years after her marriage, and then was a widow until she was eighty-four. She never left the temple but worshiped night and day, fasting and praying. Coming up to them at that very moment, she gave thanks to God and spoke about the child to all who were looking forward to the redemption of Jerusalem. Luke 2:36-38

I couldn’t help but stopping to sympathise with this godly woman. She must have been a widow for nearly sixty years or so. And she’d been waiting all her life for the saviour to come. Imagine meeting her in heaven! She’s definitely someone I’d like to have a cup of tea with.

In the first two chapters of Luke alone we meet Mary, Joseph, Elizabeth, Zechariah, the shepherds, Simeon and Anna: all of whom could have written bestselling autobiographies without a doubt, purely for the part they played in this gospel story. What strikes me about them all, though, is that they know that this story isn’t about them. It’s about Jesus. Yes, their lives matter, of course they do. Why else would we be given the details about them? But it’s not their story; it’s God’s story about his Son, Jesus.

We think the world is all about us. The media tells us to indulge ourselves, and look after ourselves, and to follow our own dreams. And as parents, we’re told to invest everything we can into making sure our children reach their potential; unleash their gifts; reach for the stars. This is quite a lot of pressure to be under!

Sometimes Christian teaching and encouragements are all about us too. Although disguised in Christian language, they’re actually messages about how wonderful we are and that we’re going to make such a difference that people will remember us for years to come.

Or at least, it’s unlikely. My pastor often says, ‘who can tell me the names of their great-grandparents?’ If you can’t remember, who will?

This isn’t our story. It’s the Lord’s story. And praise God! We get to be characters in it. The characters in Luke I’ve mentioned will forever be defined according to the role they played in the coming of the Messiah. As Mary said:

From now on all generations will call me blessed,
for the Mighty One has done great things for me –
holy is his name. Luke 1:48

I personally wasn’t there when Jesus was born, but I’m thankful that I get to be used by the Lord in whatever way he wants. My life does matter, because the things I do now will be remembered by Him, and will have consequences in eternity.

But I want to teach my children that if their life is a fairy tale, they’re not the main characters. They’re on the periphery, while King Jesus takes the spotlight. And ironically, when we try to play the starring role we’ll always feel frustrated. Like if planet earth tried to be the centre of the universe. Once we find our correct position in the story, the part that was written just for us, then we’ll find true satisfaction, and be truly thankful that we have a role to play.