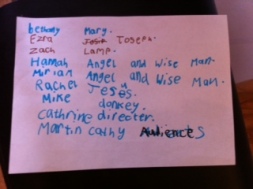 By the time you read this I’ll be in sunny Mexico!

Of course that’s not true, I’m not going to Mexico for Christmas.  I’m going to my mum and dad’s, up North, which I love. And one thing you can be sure of at my mum’s – especially at Christmas – is that wherever you’re sitting, there’ll be a newspaper supplement within arm’s reach.

But as I sit down by the fire to look at “2015 in Pictures” it’s not going to fill me with a warm fuzzy glow of contentment, is it? In 2015 the news has been dominated by terrorism, refugees fleeing for their lives, the earthquakes in Nepal back in April, shootings in the United States, and corruption in FIFA. You can easily start to wonder, is there any hope for our world today? Sometimes we just need to hear some good news, don’t we?

Well let’s look at the most terrifying birth announcement in history, from Luke’s gospel (you can read the full passage here):

8 There were shepherds living out in the fields nearby. It was night, and they were taking care of their sheep. 9 An angel of the Lord appeared to them. And the glory of the Lord shone around them. They were terrified. 10 But the angel said to them, “Do not be afraid. I bring you good news. It will bring great joy for all the people. 11 Today in the town of David a Savior has been born to you. He is the Messiah, the Lord. (From Luke 2)

We don’t know much about these shepherds, but they were doing a hard job that isolated them from the rest of the community.  They were Jews living in Roman-occupied Judea in Israel. They were poor, and they would have had to pay high taxes to the Romans. Life was tough.

We’ve heard about the shepherds and the angels so many times that it doesn’t surprise us anymore, but really it is shocking that an angel visited these poor men, working a nightshift outside a small, insignificant town.

I saw the Queen the other day. It was one of the most exciting things that’s happened to me in a long time! I was walking past a church, and she was getting out of a car and walking into the church. I saw her for about five and she didn’t even wave.

But if she’d stopped and turned round, come over to me and said, ‘Can we talk? I have some important news for you, Catherine,’ that would have been astonishing! Because why would the Queen of our nation and the commonwealth want to speak to me, lowly northern housewife that I am?   And if we think that’s ridiculous, then how much more amazing is it that the God of the universe sent his angels to visit these ordinary shepherds?

And what did the angel say? ‘I bring you good news.’ They needed some good news. And don’t we, too?

And do you notice, the angel doesn’t say ‘I bring you a new religion, or I’ve brought you a new set of rules to follow.’ This baby is good news for all of us. This is what makes Jesus’ message so different from all other religions and all other lifestyle choices. It’s not advice or rules or a moral code to follow.   It’s joyful, life-changing news.*

So what’s this news about?

Today in the town of David a Saviour has been born to you. He is the Messiah, the Lord.

Messiah  means ‘anointed one’, or king. It’s the same word as Christ. These Jewish shepherds, if they knew their Jewish scriptures, would have known that God had promised to send a rescuing king to save them.

But what did they need saving from? We get the answer in Matthew Chapter 1, where an angel tells Joseph, Mary’s husband-to-be, that this baby will ‘save his people from their sins.’

It’s not really normal to talk about sins anymore, unless it’s something to do with eating a curly wurly when you’re doing slimming world. I remember Kayleigh in Peter Kay’s Car Share talking about saving up all her syns for the weekend.

But in the Bible sin isn’t something to joke about. It’s the reason we’re not in the relationship with God that we were all made for. My kids have learnt at church that Sin (SIN) stands for Shove off God, I’m in charge, No to your rules. We want to be in charge of our lives, and so we don’t want God telling us what to do. And that means we’re not right with God, and it’s what makes relationships with each other so hard, too.

We might see this most clearly in children, just because they don’t cover it up as well as adults. ‘No!’ ‘Don’t want to!’ ‘Won’t!’ They lie on the floor kicking and screaming because they can’t have their own way. But I do wonder, am I any different, deep down?

The Bible says that this is not just what petulant tots do, it’s the way we all act towards God: we’ve all decided to be in charge of our own lives and so we’ve cut ourselves off from God. That’s why a new set of rules to follow isn’t going to help us, we need a saviour.

I don’t know if you read the story back in May about Pemba Tamang, a 15-year-old Nepalese boy who became trapped under the rubble of a 7-storey hotel during the Kathmandu earthquake. Amazingly he survived for five until a rescue team appeared and dug him out.

Now imagine that instead of clearing a path and carrying him out on a stretcher, the team had just shouted down instructions to him, or sent him a little map of how to crawl out. Of course that wouldn’t work, would it? He was completely trapped, absolutely helpless. He didn’t need instructions, he needed rescuing.

The Bible says that our sin has trapped us, so that we’re cut off from God with no way of helping ourselves out. That’s why a new moral code or a new religion isn’t going to help us. That’s why we need a saviour. And that’s why Jesus is good news for all of us. Jesus came for everyone, because we’re all like Pemba Tamang, trapped under the rubble and debris of our own sin. We all need this Saviour.

Think about it, do I believe that I’m a sinner? Maybe not, most of us don’t think of ourselves as sinners do we? But put it this way: do I live as though I think that I can get on with my life without God in charge of me? Because God sees that as sin, and a serious problem, which cost him everything to fix. He sent his son to earth as a fragile baby so that we could be brought back into that relationship with God that we were made for.

Some news you read or hear about and it just doesn’t apply to you. It might be interesting or even shocking, but unless it’s something to do with the country where you live, or likely to affect you personally, you can usually just carry on as if it’s not really happening.

And I think one way to respond to the message about Jesus is like that, to think ‘well this just doesn’t apply to me.’ But this news isn’t like that. The angels say it’s for all the people. So that does include us. Because God’s view is that everyone needs this Saviour.

Or another way you might respond is to think that you just don’t believe any of this stuff happened. Angels? Saviours?  None of it sounds real. And if that’s how you feel, maybe you could try doing what the shepherds did: “Let’s go to Bethlehem. Let’s see this thing that has happened, which the Lord has told us about.” Maybe, this Christmas, you could go and see for yourself. Read one of the four gospels (Matthew/Mark/Luke/John), or ask a Christian friend to read the Bible with you.  I’d love you to you know how fantastic this news really is, so let me know (e.g. in the comments) if you’d like to and you’re not sure how, or check out the links below:

Some good questions are answered well here, such as ‘can we trust the bible?’
Or there is this short video explaining the Christian message.
Here’s a festive video from my friend Rachel: Make the Most of Christmas

*this is paraphrased from Timothy Keller, King’s Cross.

This blog post is adapted from a talk I did this week at a Christmas event.  Sorry it’s long, but the talk was twice as long! Hope you made it to the end.

As usual, please comment by clicking on the speech bubble at the top.